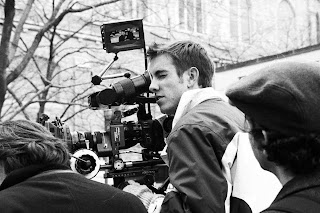 For me, this blog is an outlet, a way of sharing what I’m going through in Hollywood with those who are interested. Along the way, I’ll offer some advice and opinions, based on what I’ve learned, I’ll link to videos and articles that interest me and might interest you, and I’ll share my experience as I try and make it as a writer and director. I’m not claiming to be an expert, in fact, I’m not even a sold writer yet, but I am on the bottom rung trying to rise. Rather than providing you with hindsight I’m trying to give it to you as I go along.

Making a transition from student filmmaker to Hollywood is a daunting, difficult journey and every path is different. There’s no corporate ladder to climb, no clear route to the director’s chair or a bungalow on the Warner Bros. lot. I should know, I’m in the middle of it and I’ve got a Golden Popcorn on my shelf. So, maybe this blog can help you out.

I've got loads of content on here, and I'm adding more everyday. Check out my 3Questions series where I speak to successful people in the industry about how they got their start and their advice for how you can get yours.

Additionally, please check out my work at the website for my production company Meydenbauer Entertainment. There you'll find most of the films, music videos and spec commercials I've directed over the last ten years.

Feel free to send me an email if you have any questions, need advice, or want more information. My email is joshblog (at) meyd-ent (dot) com.

Hello. My name is Joshua Caldwell and I’m a writer-producer-director. I’ve been doing this for more than a decade and now I live in Los Angeles where I’m pursuing a career in Hollywood.

I grew up in Seattle and began my filmmaking career at Bellevue High School. Our student body officers would often create videos to show at assemblies as a way of introducing things like the Homecoming Theme or the new student body officers. These would often parody or mimic popular movies. I shot four of them between my junior and senior years wrapping it up with an hour-long Star Wars video.

The reason I mention this is because it was a very important part of my film education. We had no money, a set date when these videos would have to premiere, and 1200 kids that were expecting to be entertained. Additionally, I was fortunate to see a number of my films play in front of a huge audience. I was able to see what worked and what didn’t.

In addition, I created several award-winning projects, including American Tragedy which won several awards and was featured in a number of film festivals.

I was accepted to a number of film schools in California but ultimately decided to go to Fordham University in New York City. I made this decision for a number of reasons: 1) I knew that I would end up in Los Angeles at some point anyway, so why not live in New York City for four years and 2) I wasn’t completely sold on going to a film school.

At Fordham, I wrote, produced and directed eight short films, including The Beautiful Lie, starring Michaela McManus (One Tree Hill & Law & Order: SVU) which has been featured in several film festivals across the country. In June 2006, I was the first winner of an MTV Movie Award for the Best Film on Campus category. In the spring of 2007, I directed and produced The Ronnie Day Project for SonyBMG/Epic Records and mtvU. Since then, I've directed numerous other music videos for Universal Music Group and MySpace Records.

In between my directing projects, I spend the majority of my time working on screenplays with my writing partner Travis Oberlander. Travis and I went to elementary school together. Years later, long after I had moved away, we reconnected on Facebook, where I learned he was a screenwriter. I had a script idea, pitched it to him, and we started writing soon after I won the MTV Movie Award.

One of our features screenplays, Blitzed, was optioned by the producer of Elf and Meet Dave. It was shopped around to the town in 2010 but thus far, no one has bought it, a process I covered in as much detail as possible right here on the blog.

After the process of writing a spec and seeing nothing come of it, I've lately turned my attention to only developing and working on those projects I can go and make. The first of those projects was my short film Dig, the development, production and post-production I covered extensively here.

In May of this past year, I wrapped production on my first feature film Layover in addition to directing ten episodes of Welcome to Sanditon for Bernie Su and Hank Green, the creators of The Lizzie Bennet Diaries. Point is, I'm trying to stay busy.
Posted by Unknown 1 comment: